With all you can need, I do think these new folding electric bikes from Pedego will be on roads all over the place.

I’ve known this folding E-bike was was coming, now you do too. As with all the electric bikes Pedego builds, they put in a lot of thought and testing beforehand to make sure the end user (you) gets maximum enjoyment and satisfaction with each ride. I finally got a chance to see it in person this month at their 4th Annual Dealer Meeting, and then went last weekend for an afternoon of riding at Pedego Corona Del Mar. Good news is they are taking pre-orders and by January 15th (2016) this new bike will be hitting the streets all over the world.

I’ve ridden and tested a bunch of folding bikes with electric-assist, and found a new one to covet. It really covers every need a person might have if this genre of bike is part of your interest zone. Power, comfort and convenience is just a small list of what the Latch offers. The popularity of both electric bikes and folding bikes rises on a daily basis, so when they are as one, the numbers go off the charts.  Add in the known company and dealer support to make sure a wide smile matches every mile.

Here is the color line-up of the new Latch.

Like many E-bikes nowadays the frame is strong aluminum. Unlike many, that frame folds small for transport and storage. This means intermodal travel with your E-bike is so much easier. It means your bike security level can rise to close to 100% when at home, work and even while eating or shopping. The Latch does weigh 50 lbs., yet the battery can be removed so you have a 43 & 7 lbs. combined lifting weight. That is unless you opt for the 15 Ah extended range battery (and so many are for their Pedego bikes), so add a couple more pounds for that.

I was mega impressed with the riding comfort and smoothness. The cockpit position, saddle, and controls are optimized for all sizes, plus the tire selection gives a near no-flat confidence and great feel on any surface. You don’t see those big meats on many folding bikes, most are more geared for speed and lightweight. I am glad to give up a bit of that for the way these float and roll like a dream.

The number and location of the 250 watt geared hub motor up front might bring you a bit of apprehension, but dismiss that thought right away. Its climbing ability proved to be awesome as my wife and I hit some steep ones during our ride. At that point I was on one of their 48 volt (500 watt) Interceptors and while my bike strained some, the Latch scooted her on up with ease. From where I was sitting it appeared I was even pedalling harder than she was. So we swapped back and I tried that hill again, yup, that Pedego latch has some major grunt. 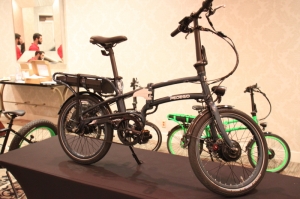 I wish I had better photos—check out the videos below for a closer look.

Yes, you might get a little tire slip from that front drive, but never once did the momentum slow. Having this arrangement is sometimes called all-wheel drive on E-bikes. You are driving the rear while the motor drives the front. Having the motor pull the bike from the front is a totally natural feeling and didn’t have any adverse affect on the ride or handling. It also helps neutralize the front to rear balance, while riding or lifting. I just found the Pedego Latch to be a delightful bike to ride.

Slowing was just as solid with disc brakes front and rear. Fenders, rack, chainguard and kickstand, mate up with the full factory lighting and bell. The only thing I would change would be a swap to some ergo grips that have a better texture for a less slippery feel. How often do you ride a bike that only has one item that could use an upgrade? Almost never I would think. Three colors are on the roster—lime green, black and space blue. With the 2 battery options and 3 color choices, this might be the easiest Pedego to decide exactly which one you want. I know already I want one (2 actually), yet have to think the last thing I need is another bike.

Have your previous experiences with folding bikes left you with greasy clothes, legs and back car seats? Throw away that problem with the Latch’s belt-drive. This Center-Track Gates rubber belt is quiet, clean and maintenance-free. It should outlast the bike, while all the time making your biking so much better. It matches up to an easy to shift 3-speed rear geared hub that is also pretty much maintenance-free. The 3 gear ratios are nicely timed to the bike’s motor for a easy ride no matter what the grade of the road ahead.

Ready to take you most anywhere.

Pedego’s new Pedal Sense is paired with a great display and button unit that has a powered USB port for your audio and phone needs. The buttons are close at hand for safe use and the display plys you with all the info you want and more. One quick push and the bike lights power up on both ends for more fun when the sun goes down. You get 4 levels of automatic pedelec (1-4), 0 allows you to ride unpowered, 5 is for full power every time you pedal, and 6 is the throttle only mode. It makes ‘Sense’.

Folding the bike is a short game of correct sequencing. It isn’t hard but might take a bit of practice. If you are accustomed to folding bikes you will take to it on the first try. I included a video that covers it, plus your dealer will make sure it comes easy for you, so with each time you need to transport or stow it, your smile will not falter. That smile will broadcast itself even more as you pump the pedals and coax the electric motor to help you with the hills, winds and any other obstacle bike riding can present.

The electric-assist is set to max out at 15 mph. Once again that may not seem like much, but I found to be plenty fast for any journey. As I continued to test ride the bike along the So Cal beaches and roads I could not find but one thing about the Pedego Latch I didn’t like (those grips—ok, but there are better). This folding electric bike will be the right answer for so many. It takes the two best kinds of bikes (electric and folding), melts them together in the nicest way, and comes from the most popular E-bike company. That is a hard act to follow.

Latch me up Scotty, Turbo Bob.

“The bicycle, the bicycle surely, should always be the vehicle of novelists and poets.”—Christopher Morley.

You can find Pedego on the web, Facebook and in your neighborhood