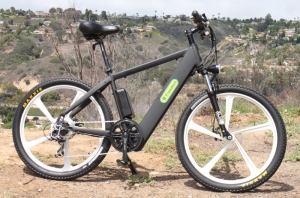 Looks aren’t everything, yet when matched with good performance, it sure doesn’t hurt.

Just recently up-graded to a 500 watt motor, this is one E-bike that really knows how to stretch its legs. Add the matte black paint, some sleek mag wheels and a plush fork, and you have a bike that aims to please with each rush of power. I was able to rack up some decent miles on this E-Freedom and had a lot of fun doing it. I felt like I was flying under the radar, as the lithium battery is hidden from view, and the sport feel it offers makes you want to push your excitement levels to high.

Unlike many rear hub motor E-bikes, this one has a more balanced ride, thanks to the battery being fairly low and in the center of the chassis. The power and speed talk 48 volts, yet it has the more common 36 volt system (10 Ah too). Pull and climbing ability have much more to do with a balanced electrical system than just voltage. When everything works in harmony you can expect a good experience. 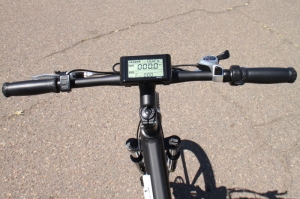 The command center is lean and mean.

It has a premium display panel in the center of the bars. Much can be seen there, including the wattage the motor is pulling at any given moment. Of course speed, distance and the such are included, along with a readout of the level of assist you have set from the thumb close button panel. Being able to make your settings without taking your hand from the grip is a good thing indeed.

This E-Freedom uses a dual control layout that works in a way I like. The automatic pedelec system was responsive with a good range between the 5 levels. It too has an 0 (off) position that keeps the motor off during pedaling, yet allows the bike to stay on so all the display readings are visible. Another good thing is that the thumb throttle (right side) stays active in all the settings including 0. The only thing that I could see be improved here is having the throttle programmed to be a true override. It will increase the power during use, but doesn’t override the pedelec function to allow a lower power output when the pedelec level is set in high.

The display parameters are adjustable in many ways. Such things as time delay of the pedelec when starting and stopping pedaling can be set. I got the (secret?) manual to show me all the settings, yet is was in poorly translated English, so I didn’t enter those menus to play with the settings. I am told they are working up a more understandable tutorial to make it easier to tailor the motor programming to each rider’s needs. The default settings the bike came with was fine for me though.

The sport feel of the cockpit on this Green World Bike will work for many. I’d rather sit more upright, but I do enjoy my time on bikes like this. The 7 speed shifter and button panel had good positions for easy use. The soft fake-o (?) leather hand grips felt good and the E-Freedom comes with a Velo saddle that might not need up-grading for most riders (just wide and soft enough for a nice feel). The small bell is built-into the left brake lever and a super solid kickstand is mounted on the aluminum frame. The headlamp works ok, is powered from the motor battery, and is switched from the button panel. 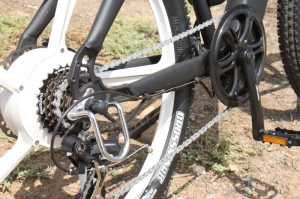 The E-freedom I got was extra fast. I am thinking the governor wasn’t set, as 24 mph was easy to attain. On the whole, the handling was acceptable, and the Suntour fork has good damping. It didn’t take long to find the right preload setting on the fork that worked well for my weight and riding preferences. The gearing was close enough to what I like, so no gripes there. Going thought the gears was fun, especially with all that assist power on tap. The cable operated disc bakes never failed to please during each phase of testing.

Right away I noticed some extra flex in the rear. I quickly found it is due to a lack of total rigidity in the mag wheels. This did hamper my confidence some and the extra aggressive tires sure didn’t help that when riding on the pavement. The tires do have a center raised rib for smoothness when going straight, yet when laid over in the turns it was hitting on the knobbies, so I decided not to get anywhere near my perceived limits. I loved the way the mags looked, but for my tastes, a good set of standard spoked rims and more street-worthy tires would be welcome. That, or having some better, beefed up mags would work to help.

Not only are they up-dating the battery latch, the white part will be changed to black.

The lithium battery fills the void in the frame well. It is easily removed with the included key, and that is a good thing as it does need to removed for each recharging. Like all the E-bikes I test, the E-Freedom comes with a smart charger that does the job as intended. The battery has a main power switch on the housing as well as a set of lights to show remaining charge capacity. The display also shows cleanly how your battery levels progress during your ride. It has a carry handle too. One thing though, when reinstalling the battery in the frame, make sure it solidly clicks in place. It does take a good firm push.

Right now Green World Bike has 3 US models. Their brochure shows some others including a fat-tire E-bike. I was told they are prepping to launch more models here, so I would think with the popularity of the sand and snow E-bikes, that will be one of them. I even see some E-scooters there, and a couple folding E-bikes, the smaller of the two will be my next test subject from this E-bike company. Plus, more up-grades are in the works for this bike, including better tires, a reworked battery latch, and a rear taillight among others. So keep an eye on their website and Facebook page to see what they will be offering next.

Feast your eyes on this.

Green World Bike had a great first showing at my last E-bike seminar. Many flocked to try them out and from what I saw the response was very positive. Their 16” wheeled easy fold E-Trolley (my next bike from them) was one of the many big hits of the event. They seem to have a company policy of great bikes and happy customers. The way the E-bike industry is growing, I think we all see the need to please is a key to success.

See if you can test out an E-Freedom, I did. Turbo Bob.

“The bicycle is the most civilized conveyance known to man. Other forms of transport grow daily more nightmarish. Only the bicycle remains pure in heart.”—Iris Murdoch, The Red and Green.

Here is a walkaround video I posted on this E-bike.