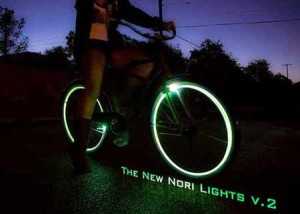 I took this photo off the Nori Lights website. I hope they don’t mind. It shows the effect well. I do recommend you watch the video I linked to at the end of the article to see them in action.

Not quite two years ago I installed the Nori Wheel Light system on one of my bikes and offered up a full report on them. I made a few changes in the installation since then to fine-tune them to my needs. Plus a set went on my wife’s matching E-bike to add to her safety and fun. This article will touch on that a little, but is really being written to introduce you to their new Ver 2.0 system. The effect is still the same, but I will highlight the pluses and minuses (and differences) of the new version.

What is different about the Ver 2.0 has to do with the light pods, the lack of wiring and the installation. Before I go into that, let’s see what this system is, how it works and what it can do for you. This modern, yet simple, wheel lighting system uses science to bring it to life. The ultraviolet LEDs shine their light on a self-adhesive phosphorescent strip. The strip is placed on the bike rims sides (or on the spokes) and while turning it passes under the light of the ultraviolet LED lamps, glowing brightly. 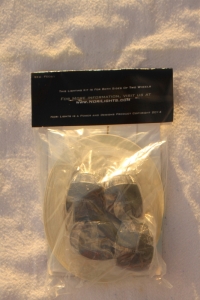 Everything you need, except for a few tools, are included in the package.

The effect is stunning and very visible. Although having them is cool, the reason is deeper than fancy looks. In the past bicycle lights were focused only to the front and rear, leaving the sides of your bike invisible to traffic. Mandated reflectors in the wheels help little in real world of night bike riding. Having the sides of your bike lit in this manner increases your riding safety to new levels. Bike safety equals happiness, so a set of Nori Lights on your ride can make you and the bike shine like never before.

Like the original Nori Lights, step one is adding the tape to your wheels. Their website outlines very specific instructions on prepping your rims and installing the phosphorescent tape so it will stay in place. If you have rim brakes, then putting it on the spokes is necessary as the tape applies where the brake pads will normally contact the rim. With disc brakes and coaster brakes the rim is the best spot. 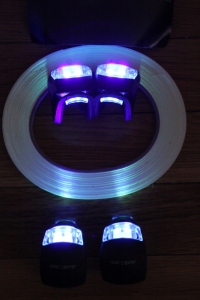 Here are the Ver 2.0 pods and the rim tape before the installation.

Our two bikes with the original Ver 1.0 Nori Lights had issues with the tape staying in place. The rim sides are heavily machine grooved leaving little surface area for the tape to stick to. So before long I decided to weave the tape on the spokes about 1 inch in from the spoke nipples. This has worked well and even allowed me the option of adding extra tape for an even brighter glow. It did require some other mods outlined in the text coming up.

With this new set of Ver 2.0 lights, I put them on my beach cruiser that has smooth sided rims. I followed the instructions and the tape has adhered fine. This brings up another point. My two first sets of Nori Lights came with enough tape to do two rows on each rim side. This adds up to a 12mm wide glowing strip on each rim. On the one bike I added 2 extra rows of tape to get a full 24mm wide strip for even more light. 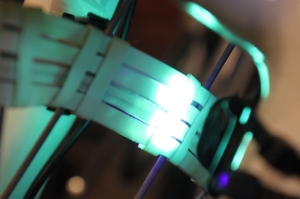 This close up (with the Ver 1.0 system) shows how I installed the tape in the spokes—and doubled the light output too.

When you get your Nori Lights, the kit comes with enough tape to put one strip on each rim side (6mm wide). You can get (and I recommend it) an extra roll to double that to 12mm wide for a brighter glow. Most rims will accommodate the extra strip. If you put the tape on the spokes because you have to or want to, you can go wider like I did. The two LEDs in each pod will light up to four strips wide, but no more than that. I have added a video below that shows our 3 Nori Light equipped bikes, so you can see the light output difference with the 1, 2, or 4 strips (plus another video showing the installs).

Here is the info on the up-dates in the Ver 2.0 system. Now, instead of one central battery pack with wires to each of the four light pods, each pod is independent of the others. Two inexpensive lithium button batteries power each pod. They are easier to install and to swap from bike to bike if desired. They strap to the fork and frame with a silicone (?) body and strap similar to many blinking front and rear bike lights already on the market. BTW, with either system you can expect 40 hours+ of battery life. 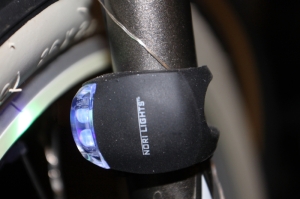 The Ver 2.0 pod on the front fork. All lit up and ready to ride with fun and safety.

The pods go onto your bike quick and easy, making the phosphorescent tape installation the bigger part of the job. On the front forks, being fairly large in diameter, the pods fit great. The rear ones took more time as the frame diameter on my bike is much smaller there. Nori lights was smart to include some foam sleeves to solve this issue. With a bit of trimming on the foam, the rear pods locked on nicely.

The original used a pair of pricier AA lithium batteries in central case with an individual wire to each of the 4 pods. Plus the pods used rubber bands to hold them in place, in a not very secure manner. On our two bikes that use Ver 1.0, I used tie straps for the pods instead of the bands for a very solid mount. I also had to do some mods on the wiring when I put the glowing tape on the spokes, so the wires would clear the moving tires. 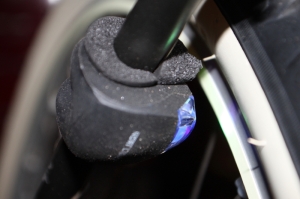 You can see the foam spacer on the rear pod to allow it to fit on the skinnier frame tubes.

Even though the install took some doing on my part for the Ver 1.0, I was quite pleased with the outcome. The one (big) plus with this system (Ver 1.0) is that all the pods turn on and off from a single switch. With the 2.0 you will be using 4 different buttons (one on each pod) every time you turn them on and off. Add to this one more thing, the fact that the new pods have two blinking modes for cool lighting effects. So with each time you use them you need to toggle the 4 individual switches though 4 modes each (except for just turning them on), which I do find to be relatively inconvenient. So, easier install, harder to use. I guess that is an ok trade-off.

Move your bike to the future with Nori Rim Lights, Turbo Bob.

“Bicycling is a big part of the future. It has to be. There’s something wrong with a society that drives a car to workout in a gym.”—Bill Nye, The Science Guy.

Two videos on Nori Lights 2.0. The first show the three bikes in the daytime for install and other comparison features. The second is at night to show you the different levels of brightness with 1, 2, or 4 strips of the rim tape.

This is the article I wrote on the original Ver 1.0 Nori Lights