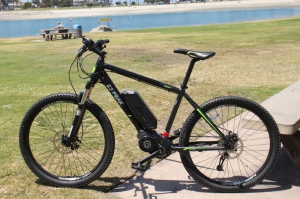 Looking light and powerful, the IZIP E3 Peak might be the bike for you.

I often say “If it doesn’t have fenders, a chainguard and kickstand it can’t be much of a bike.“ Although I try to keep an open mind during my reviews, there were other things about this E-bike that didn’t click for me. I fully realize this is a mountain bike with some great advanced features, yet the bike and I never bonded. Thus my title, “Missed Connection”. Let me tell you why.

When I first rode this new IZIP at Interbike last year I liked it a lot. It was quiet and smooth, feeling good for the couple three laps I took in at the outdoor paddock track. Of course that amount of time in the saddle just doesn’t match-up to a extended test like this. Even when I was convinced this wasn’t my dream E-bike, I still took it on many more long rides to decide why and make sure of its attributes. With all that, no positive connection for me ever came about. 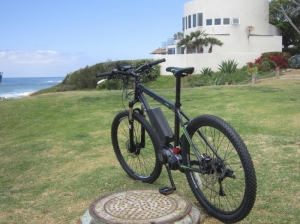 Although speced with some nice pieces, the Peak and I still didn’t bond

Part of this has to do with the fact that I’m not a mountain biker. Through the years I’ve ridden many trails, slid in the gravel and looked for air for thrills. I’ve been on some pretty nice bikes that handled it well, yet the whole dirt and constant wild ride thing and I are not as one. I prefer more of an upright bike and all that goes with that. The bent-over stance and cockpit layout of a mountain bike doesn’t get my blood flowing.

I almost always take the time to get the saddle height and angle set, and the bars and controls too, something I did with this E3 Peak. Even with the optimum groove in this department I just never got comfortable. A semi-lay down sport bike I can handle, but this bike is a little beyond that. The narrow saddle and the extra wide bars might be great for some, just not me.

All that I can live with for the testing, but it was the combo of the controls and the motor style that kept my smile from brimming. The extra speed and rush it brings was fun to be sure, yet still no solid feel of oneness came about between the bike and myself. This kind of comes down to the mid-drive motor and the way it all works together for this IZIP E-bike. Much has been talked about mid-drive and many desire this latest technology, but I found some points lacking, some that others might not. 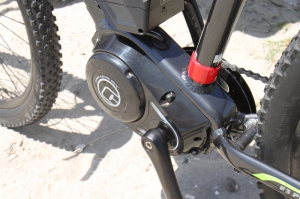 350 watts of quiet mid-drive power. FYI, the red item is a reflective leg band. I keep one on all my bikes just in case.

Mid-drive, what does that mean? It means the motor is in the center of the chassis at a very low point. Having the weight of the motor there helps the balance and handling, a good thing and something I felt in spades during each ride. It also means the motor power is sent to the rear wheel through the same drivetrain that your foot power goes through. This feature has its good and bad points.

Using the bike’s gears for the motor does allow it to flex its muscles better than a hub motor (generally the most common set-up on E-bikes). It will increase the available torque in the lower gears for climbing and acceleration. In the upper gears it can be more efficient and up your top speed (good points). The bad part of this is that precise and correctly timed shifts become mandatory. On most hub motor electric bikes shifting needs take a back seat (not as important) to the bikes overall performance and rideability. 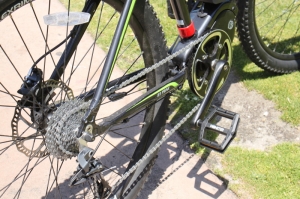 The many speed drivetrain worked great, but got put to the test from the motor’s power during shifting.

The other issue I have against hub motors doesn’t apply to this bike as strongly because this is no beginner’s E-bike. There are some people who just don’t take to shifting a bike as well as others. Knowing when to shift and timing it correctly during your pedaling stroke and pedal pressure can elude even seasoned bicycle riders. Being in the wrong gear at the wrong time can really affect your ride. Plus shifting with heavy foot pressure on the pedals causes noise and wear in the gears and chain.

Anyway, if the motor is applying power during a shift (which it does if you are pedaling) on this Peak (and most other mid-drive E-bikes) you get the same effect, banging noise and a disturbing feel. The control system on this bike is sensed off of pedal pressure (torque) and pedal cadence (speed). It does have a hand throttle, but it is only for low-speed (up to about 8 mph). Most every shift I made was a disturbing one and on this E-bike you shift a lot. 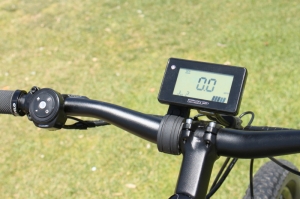 The display and its working are much to my delight, it is the way the system is programmed that drew my criticisms.

You can stop pedaling to shift (so the motor powers down), but then again with a derailleur set-up you need to pedal to allow the chain to move to the next gear. This bike is said to have a stretch-free chain (and that left questions in my mind also). I just got to the point during all my riding to realize that it isn’t my bike so all that noise and wear wasn’t my problem, yet feeling in the long (and maybe not so long) run, it could cause issues.

As much as I try not to make comparisons to motorcycles and cars when it comes to bicycles, to explain this combo’s feel it is hard not to do. For anyone who has driven manual shift cars and bikes you know being in the wrong gear just won’t work. Trying high gear at low speeds causes no go and risky motor lugging. Low gear at high speeds is even worse. On the Peak during climbs if I shifted under power it kept pulling but made a big gang with each shift. If I let the power off for the up-shift I lost so much momentum that I had to downshift right away (with the resulting banging).

All this would seem to be magnified (in a bad way) in actual mountain bike riding. In those situations you need to be in full control at all times. I can’t say if this Peak will excel in such a situation, but there are real mountain bike riders putting this bike through its paces in the hills and mountains. I just hope they will be fully honest with their experiences to tell the real story of this bike’s compatibility with what it is designed for. Some tend to sugar-coat such things so I will be anxious to hear the unbiased truth. 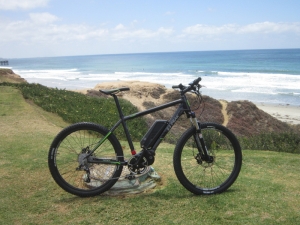 The mid-drive E-bikes I have ridden that I liked either had the NuVinci continuously variable transmission, or throttle control only, (or a combination of both). With those I could control the motor during shifting and / or there were no gears to bang. I do feel that some way advanced motor programming will be needed to make this motor / drivetrain match my needs.

Enough with the negative stuff (that’s not my bag). This IZIP E3 Peak electric-assist mountain bike has some nice pieces on-board. That quality shock up front felt great on the road and the rough spots. The hydraulic disc brakes are spot on with the perfect feel and stopping power. 48 volts of lithium battery power give the Peak plenty of speed and grunt. The shifting components are nice and work well. 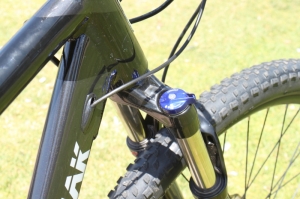 This sweet fork isn’t the best on the market, but worked great for me.

This is a fun bike in so many ways. It is a light-weight bike in the E-bike world. The chassis responds great and those 27.5 wheels and tires worked well on every surface I rode. I was glad to get this time with it and kind of sorry my report wasn’t more up-beat. Not every bike matches my needs and I do think taking one for a ride will answer your own questions about if it connects with you.

“A good quote is like a handle of the bicycle which has the power to take you onto the beautiful path of life.”—Vikrant Parsai.

Here is a video I posted on the IZIP E3 Peak